What is Dry Aging? The time-honored way to age beef is to dry age it. Aging beef is something that a lot of companies talk about in their sales pitch, but too few consumers truly understand what it means so we thought we’d write a blog post all about our process and how it differs from most large beef producers.

Dry Aging is something we at Murphy’s Family Butchers have been doing for generations. We do things a little differently than other producers. After our animals are killed they go into the cooler as hanging sides of beef. We hang our sides in the cooler for 24 days or longer at very precisely controlled temperature, humidity, and airflow. Most of the large beef producers let the sides hang and cool for 24-48 hours and then bone out and vacuum pack the meat into plastic bags in a process called wet aging.

So, what scientific occurrences are happening while meat hangs? Two main factors that affect meat throughout time are flavour and texture. 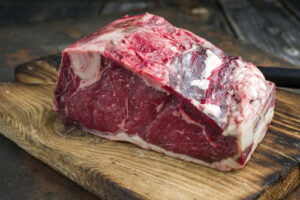 Once the animal is slaughtered and the control systems in its cells stop functioning, the enzymes begin attacking other cell molecules indiscriminately, turning large flavourless molecules into smaller, flavourful fragments. They break proteins into savoury amino acids and fats and fat-like membrane molecules into aromatic fatty acids. All these broken-down products contribute to the intensely meaty, nutty flavour of aged meat that differs greatly from fresh meat.

The second factor affecting meat over time is that the muscle enzymes also diminish toughness. The major enzyme called calpain affects tenderisation post – rigour. This enzyme mainly weakens the supporting proteins that hold the contracting filaments in place. It is well known that enzyme activity in meat goes on for about 14 days, with days 3 to 11 been the most important for hanging beef to stretch naturally. So, what is happening after that? Where does the improvement in flavour come from? Traditionally, dry aging would take place for about 21 to 35 days. At this stage, some would say that the meat has reached its potential, the correct balance between tenderness, taste, and juiciness. Personally, I really like steak at the 35 Day Dry Aged period and it’s the most popular stage our customers would ask for.

Naturally, over time there will be some shrinkage as the water is coming out of the meat, so Dry Aged Beef is more expensive than wet-aged beef. At this point, 35 days hanging steak has lost about 15% of its weight. At 45 days the steak has a little bit more funk with a deeper and more complex flavour than the steak aged 30 to 35 days and the flavour of the fat has also changed. At 80 to 100 days, the white striations on the surface of the meat are a good mould and salt which along with the water has been extracted from the meat. The crust protects the meat the same way a rind does on cheese. The exterior crust is shaved off before its sold. The steak is slightly darker and drier in appearance than the fresh steak. At 120 days!! …yes we’ve hung steaks for that long for specialty steaks for a customer’s requirements. The steak has lost 35 % of its original weight. A steak aged this long has a very intense funky beef flavour, for the customer who really appreciates an intense beef flavour. 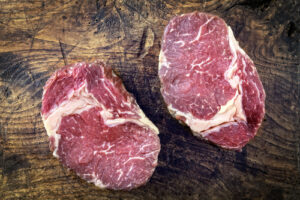 Unfortunately, dry aging is much less common practice than wet aging, mainly because it is not “mass production friendly”. Before the 1970s, all beef was dry-aged. It was the advent of the vacuum-sealed plastic bags that made wet aging possible. Thus the age-old wet v Dry aging controversy began. If you’d like to taste the difference check out our Dry Aged beef here – we’re pretty confident you’ll never go back!

Order online and collect in store.

We use cookies on our website to give you the most relevant experience by remembering your preferences and repeat visits. By clicking “Accept”, you consent to the use of ALL the cookies.
Cookie settingsACCEPT
Manage consent

This website uses cookies to improve your experience while you navigate through the website. Out of these, the cookies that are categorized as necessary are stored on your browser as they are essential for the working of basic functionalities of the website. We also use third-party cookies that help us analyze and understand how you use this website. These cookies will be stored in your browser only with your consent. You also have the option to opt-out of these cookies. But opting out of some of these cookies may affect your browsing experience.
Necessary Always Enabled
Necessary cookies are absolutely essential for the website to function properly. This category only includes cookies that ensures basic functionalities and security features of the website. These cookies do not store any personal information.
Non-necessary
Any cookies that may not be particularly necessary for the website to function and is used specifically to collect user personal data via analytics, ads, other embedded contents are termed as non-necessary cookies. It is mandatory to procure user consent prior to running these cookies on your website.
SAVE & ACCEPT